The history of 153 Hammersmith Road is as fascinating as the building itself. Built by Alfred Waterhouse, who was already well known as the famous architect of Natural History Museum, to house St Paul’s school from 1884 until 1968.

It was built as part of the “new school”, which moved from near St Paul’s Cathedral to West London. The handsome gothic edifice of red brick and terracotta was built in a sixteen acre site, between what is now the Talgarth and Hammersmith Roads. In those days, Hammersmith was considered to be in the countryside.

The number 153 has long been associated with the miraculous draught of fishes recorded in St John’s gospel, and for several generations Foundation Scholars have been given the option of wearing an emblem of a silver fish.

St Paul’s was the largest school in England at its foundation, and its High Master had a salary of 13 shillings and sixpence weekly, which was double that of the contemporary Head Master of Eton College. The scholars were not required to make any payment, although they were required to be literate and had to pay for their own wax candles, which at that time were an expensive commodity.

The St. Paul's Hotel was awarded by the LABC:

"Best Change of Use of an Existing Building or Conversion" 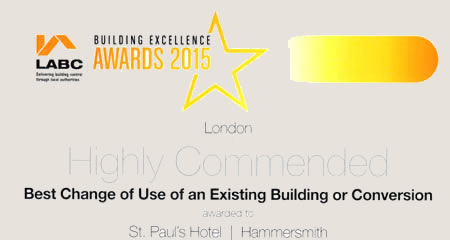